Do you want to create a successful Facebook™ group that makes you money or
turns your hobby into an EXTRAORDINARY SUCCESSFUL BUSINESS? 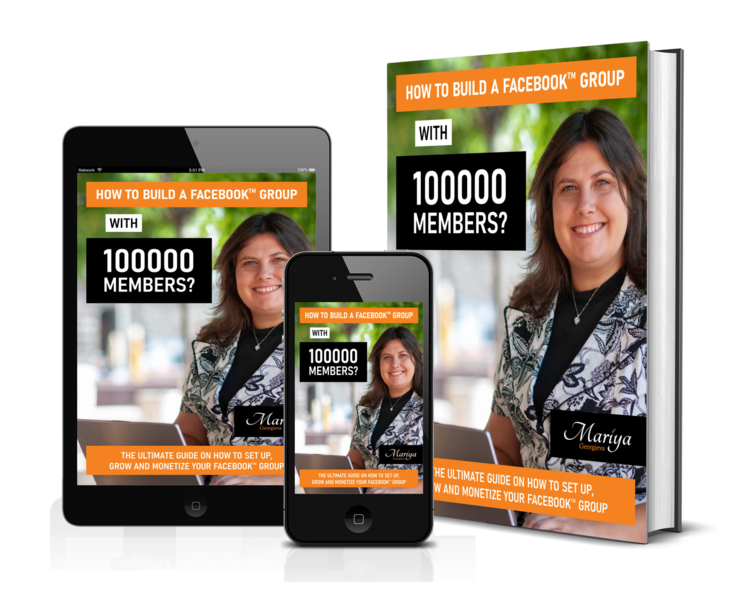 YES! I want It NOW

How To Reach More People
& Rapidly Grow Your Facebook™ Group...
Empower Your Brand and
Have a Bigger Impact on the World!

A note from Mariya Georgieva, author of

This is the most important page you will read today!!!

You bravely start your Facebook™ group hoping for a big community that will support your extraordinary passion, hobby or business.

You were hoping  to monetize it and reach as many as possible customers,

And you’re motivated, passionate, and ready for abundance and success.

So why are things not working out how you hoped?

I’ve been where you are, but I turned it all around & built my 100 000 members Facebook™ Group and made my business profitable!
…. But let's get real:

It took me a while to figure it out myself.
The Ultimate Facebook™ Group System that I outline in this book has allowed me to create extraordinary life…. but I’m not suggesting that you will become successful overnight…

The truth is, I am not sure how successful the person who reads it will be …Becoming a successful entrepreneur entails risk as well as consistent effort and action. If you are not willing to accept this, please DO NOT GET THIS BOOK. With that said, let me show you…

Exactly what you are getting…

First, let me be honest, this isn’t your ordinary “social media” book.
Time is precious, so I share only proven tactics that are working Right Now. I’ve written this ultimate guide exclusively for the entrepreneurs and individuals who want to build a future of abundance.

You can take control over your life and create the reality in which you will be happy to live.
You can actually use the same system to create a variety of successful Facebook™ Groups that support different businesses, products, services, and more.

Whether you’re a coach, social media consultant, expert, course creator, or service provider…
If you want a successful Facebook™ group or you want to get more clients… this book will work for you.

Here is a fraction of what you're getting:

How to build a Facebook™ group, which will guarantee you a profitable business strategy – technical settings, e-mail list, automation, and communication system (this is really important to build a strong community from the beginning) on page 47.

Strategy for ensuring continuous growth of the group, activity, and efficiency on page 66.

Comprehensive content strategy in the group, which guarantees potential customers on page 75.

How to monetize your group and increase revenue in your business on page 81.

Here is what to do next…
Simply click any of the buttons on this page to complete your order… and you will receive the book download in the next 5 minutes via email.
You can access your book anytime, anywhere, without waiting for any package!

Just imagine how incredibly amazing it will feel when you… 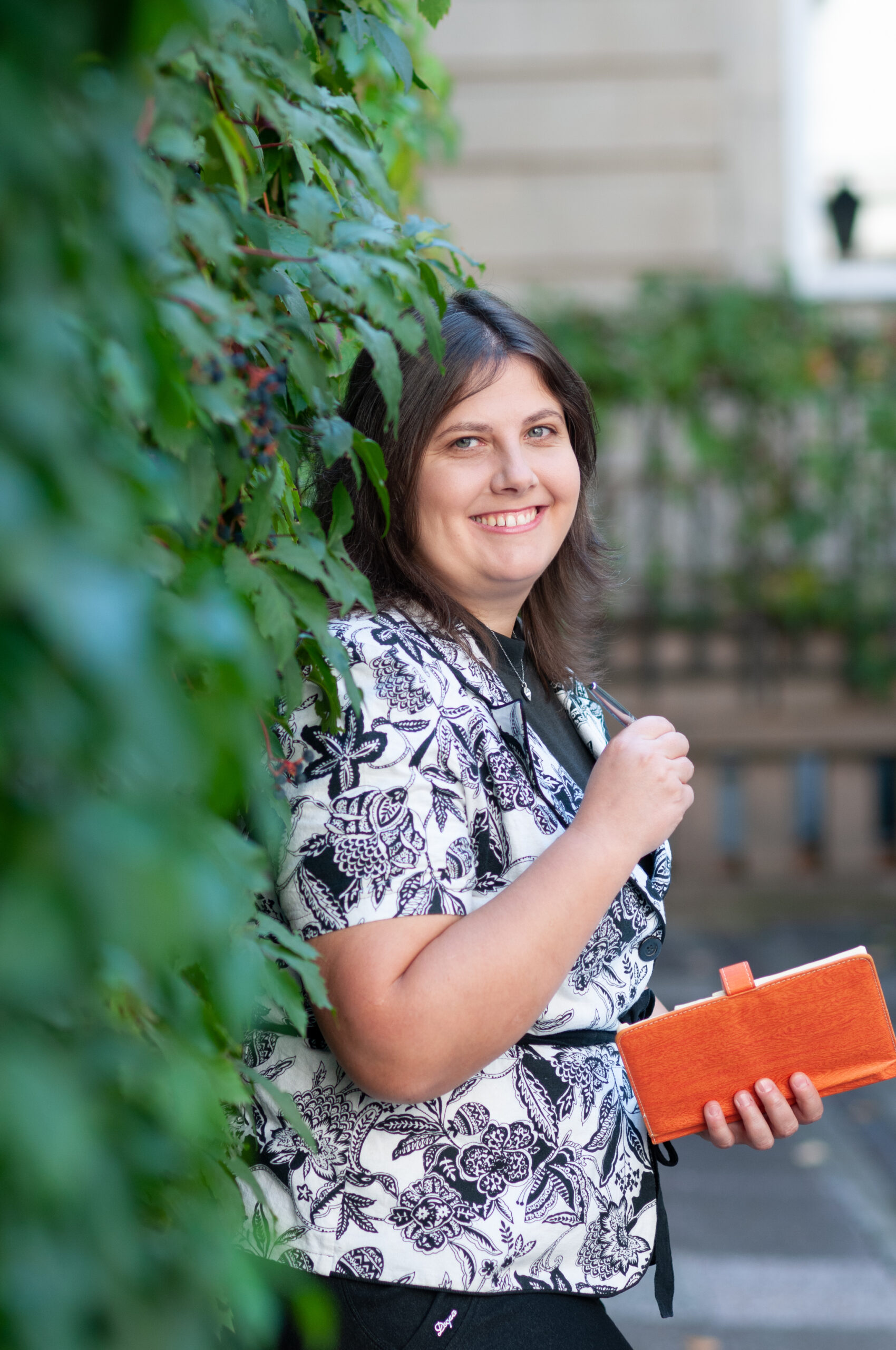 I am Mariya Georgieva 😉
A Serial Entrepreneur and Your Success & Business Coach.


Are you wondering how I started my fairytale?

At the age of 13, I knew I wanted to change the world for good, and I felt it like my mission in life! I believed that there are two different ways to accomplish my goal: politics through the power of government or cinema through the influence of the media and movies. That’s why my education was in Political Science, Diplomacy, and International Relations. During the vacations, I worked and travelled all over the world to learn more about the different cultures and people.

So in my mid-twenties, I was already a political expert, and at 26, I was a candidate for deputy in the National Parliament. However, I realized that nothing is dependent on me in politics, and this is not the way to fulfil my aim to help as many people as possible.

Then I decided to follow my other dream to become a screenplay writer for a few of the most famous TV programs, thinking I could have even more influence because every word I wrote was directly on the TV. I could reach and inspire everyone much more than in politics. Meanwhile, I became an image-maker and social media strategist for many musicians and public figures. At the same time, I was managing different businesses.

But here also something was not fitting exactly in my vision for life. Everything was too stressful and overwhelming. The biggest problem was that the only thing I was doing was making rich people richer! At 29, I worked hard in a television program while I had burnout, and my life changed radically…

Then I made the most significant decision in my life!!!

I went to Iceland!!!
In Iceland, I was surrounded by nature, pretty far from everything. I had only 100 euros in cash in the most expensive country in the world.

I knew I needed to change my life and never reach this point again.

I needed to build my work around my life, not the opposite way!!!

I realized that the secret to that is to become an ENTREPRENEUR.

Iceland was the best experience in my life and probably the most significant because I met my BUSINESS MENTOR. I spent five years there while I was working and learning from him.
All these years in Iceland and after I left it, I started to build my BUSINESSES and to create MY EXTRAORDINARY LIFE.

When will I receive my digital copy of the book?
Once your purchase is completed, you will receive after 5 minutes email from which you can download your eBook directly ‘How to build a Facebook™ Group with 100 000 members?’

Who is the ultimate guide ‘How to build a Facebook™ Group with 100 000 members?’ ebook for?
This book is for all people who want to make a successful Facebook™ group that turns their hobby into EXTRAORDINARY SUCCESSFUL BUSINESS and to seriously up-level their current results.

Can I get a physical copy of The Book?
Currently, you can get only the eBook version of the book, and it is only available on this page.

What is your refund policy?
There is none because the ebook and the strategy inside are too precious. It will help you level up your abilities and knowledge and start and grow your Facebook™ group, and empower your online social media strategy and business quickly.

If You’re Ready To Build and Grow Your Profitable Facebook™ Group or
Turn Your Hobby Into a Thriving Online Business,
Then Click ‘YES! I want my Copy NOW’ Below

Here’s Exactly What You’re Getting in 'How to build a Facebook™ Group with 100 000 members?'

For your security, all orders are processed on a secured server.